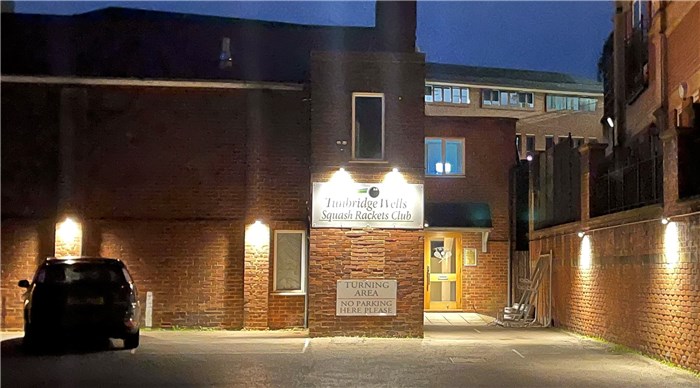 On 5 July 1935 the Kent & Sussex Courier reported : “One of the finest Squash Rackets Clubs in the country is being constructed at Tunbridge Wells.”

The courts were officially opened on 10 October 1936, and soon afterwards a share in the club was bought by Alan Picton, a Kent county player, who was to have the most prominent influence on its fortunes for more than 30 years. The club was immediately successful in attracting members, but progress was halted by the war – in July 1940 the courts were requisitioned for storage purposes – either tea or sugar, accounts differ!

When the club reopened in January 1947 Alan Picton was the sole proprietor; he remained honorary secretary for the next 23 years, and the club developed into one of the strongest in the South East. Alan's daughter Annette was a top player, representing Britain at the age of 19.

After Alan Picton's death in 1970 a members club was formed, and this merged with the neighbouring Bridge club; despite initial enthusiasm, this turned out to be something of a disaster and the clubs separated again in 1974.

Mrs Picton kindly donated funds towards the building of the third court, and the Picton Court was opened in 1976. Subsequently, the club was able to buy the freehold in 1983. Thanks to further fundraising, and the hard work and skillfull management of many committee members, various extensions and improvements have also been made over the last 25 years. These have included the replacement of the original glazed roofs with conventional tiles, an extended bar and lounge area, new kitchen and storage areas, and greatly improved changing rooms.

In 2005 the club embraced 21st century technology by becoming one of the first in the country to establish a website and introduce on-line court bookings. The courts have also been maintained to a high standard, with regular replacement of the floors, the replastering of all the walls, and upgrading of the lighting and the court heaters. In fact, in 2010 an inspection of the courts by the Technical Director of England Squash rated them as “outstanding”.

In the last 25 years individual members, from juniors up to veterans, have maintained the record of the past by playing to a high standard and achieving success at national and county level. We continue to have mens and ladies teams in the main county competitions and these attract some of the best players around.